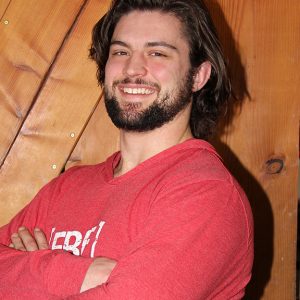 John discovered the sport of CrossFit as a 17-year-old by stumbling across the CrossFit Games on ESPN but wouldn’t step foot into a CrossFit gym for the first time until 5 years later.

After a high-school career that culminated in being named an All-American in wrestling, John attended Wesleyan University, where he played football and wrestled. After his collegiate athletic career was cut short by two shoulder surgeries, he was introduced to CrossFit as a workout regimen by one of his friends.

While recovering from his second surgery, he started CrossFit, and began an individualized program. The physical therapist on staff at his gym worked in conjunction with the coaches to provide him with the proper progressions and rehabilitation from his surgery to ensure that his repaired shoulders would function properly. This experience convinced him that CrossFit can play a vital role in helping overcome injuries and dysfunction to lead a more fulfilling life. It also fostered a passion for helping others experience the liberation of gaining new strength and ability through physical movement. John is excited to share that passion with the Front Range Community.

In addition to coaching responsibilities at Front Range CrossFit, John is responsible for new members and community development. He is especially motivated by helping someone learn the skills necessary to enjoy CrossFit safely. Feel free to reach out to him with feedback, ideas, comments, and questions.

When he’s not at Front Range or working out, John can be found in the mountains, on his motorcycle, or wondering how he managed to spend so much money at his local bookstore on such a short trip. He also is pursuing a competitive career in CrossFit and Olympic Weightlifting.